Wildlife at the Blue Lagoon 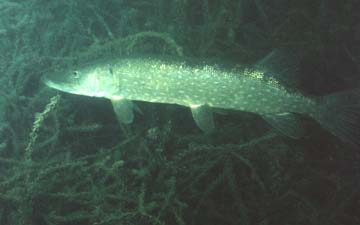 Seen around the Blue Lagoon in sizes from tiny to around three feet long. Easily distinguished since its fin is well back on the body. Also distinguished from other fish by its aggressive (or at least not scared!) attitude. For the best chance of seeing a pike, swim SLOWLY round the sides of the North and East banks of the Blue Lagoon, looking into the reeds. Although not naturally nervous, treats a diver as a six foot fish and will dart well into the reeds if you get too close or make too much movement. 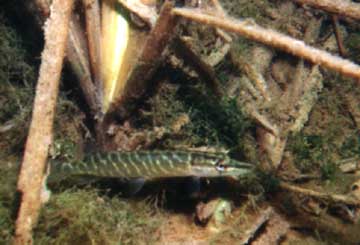 A junior pike, these are between two and six inches long. They are recognisably pike although they exhibit stronger colouring which fades as the fish matures. Found at the base of the reeds (into which they merge) in shallow water. They are difficult to spot since they are very nervous and can flee up the bank into a few inches depth. Best places to look are in the shallows of the north, east and south banks. 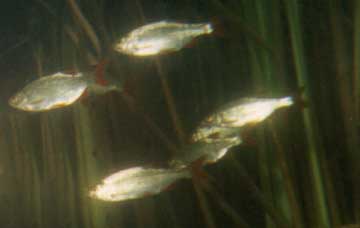 A member of the Carp family, the Roach has a dark back with silvery white sides and relatively large scales. The fins usually have a red tinge towards the tips; Roach tend to go around in shoals of between ten and twenty fish. They grow up to 40cm although more usually seen between 10 and 20cm. As with most fish in the Bluey, the best place to see them is round the edges in water less than 6 metres deep. 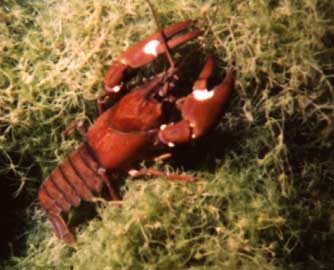 The best description of the American Crayfish is as a small lobster although the colouring is different. The Crayfish will attack and eat anything including small fish and each other! It is not uncommon for Crayfish to lose one or both claws in the fight. Losing both generally results in death since the Crayfish cannot feed but one damaged claw can grow back. This means that many are seen with only one claw or two claws of different sizes. Handle carefully unless wearing gloves, they pack a nasty nip! 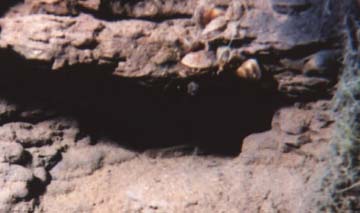 No, not the name of an animal but still worth a look. While swimming round the North bank, you will notice the wall (between three and eight metres) is full of holes. These have been dug by the American Crayfish (see above) and if you sit still, you may see a pair of claws slowly emerge. The crayfish knows it can not be attacked from behind, sits and waits for its prey.

The problem (for us) is that the holes weaken the cliff and occasional landslides make the lake bigger and lower the visibility. 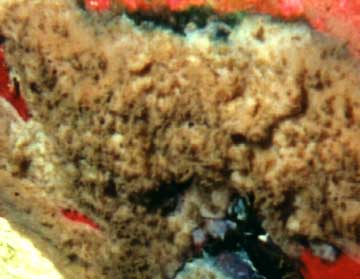 Flat, boring looking and off white in colour, the River Sponge (or Ephydatia Fluviatilis) does not look that exciting. It grows on flat wooden, stone, plastic or metal surfaces and looks like mould or slime. In autumn they grow brown nodules which later fall off, to form next years sponge, while the parent dies over the winter. Like Mussels, sponges rely on food floating past and can be killed by physical damage or too much silt in the water. 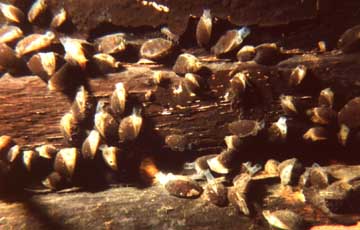 Mussels grow throughout the Blue Lagoon but are easily missed. Most are about 1/4 inch (6 mm) across but some grow up to one and a half inches (35 mm). They attach themselves to any flat surface be it wreck, shopping trolley or bit of brick or stone. Since they cannot move, they rely on food drifting past the open end of the two shell halves which means they are only found in places (like the Bluey) with a water flow. The presence of mussels is an indication of the water purity and are one reason we limit the numbers of divers, they don't like kicked up silt any more than we do! 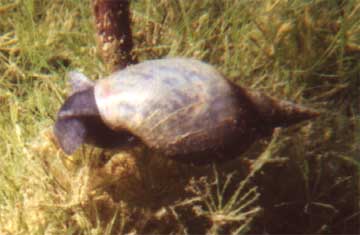 Like mussels, snails are an indication of the purity of the water. They are from the same family as mussels but have one large shell instead of two smaller halves. ; The snail is also more mobile than the mussel as it glides along on its single foot. The best place to see snails is in the shallows along the southern bank where specimens up to two inches long can be seen. Once built, the rigid shell can not change shape, as the snail grows, it adds more turns to the shell, giving it a ‘corkscrew’ appearance. All snails in the Bluey are right-hand thread! 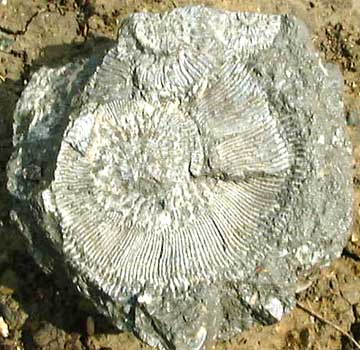 Recently two fossils have been discovered in the Blue Lagoon (by different divers on different days). The outline of the spiral shell of a prehistoric creature (an Amonite?) can be clearly seen in this photo.