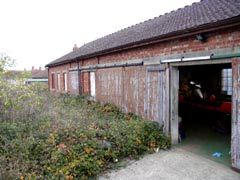 The Old Pumphouse in Newport Pagnell has been home to Milton Keynes Sub-Aqua Club for many years. It is the third permanent home occupied by the Club since we were founded in the early 1970’s. The Club has renovated the former semi-derelict building to include lecture facilities, a kitchen and toilet. The building also provides storage for the Club boat, compressor and other equipment. The Pumphouse is now a place for club members to meet, fill air cylinders, discuss the next trip or just chat about diving. Pictured right is the existing clubhouse.

All this is about to change…

In late 2003 Newport Pagnell Council announced their intention to develop the site to include a new Community Centre. At the same time, they were keen to reassure the Sub-Aqua Club that we would not be left homeless. The plans also called for as little change to the existing building as possible since there were many interesting architechtural features. Pictured right are the names of those responsible for construction of the Pumphouse in the 1930’s. Looking like a gravestone, this plaque is on one of the outside walls.

While the local council want to see the Sub-Aqua Club housed in the new centre, they must be seen to be spending the local ratepayers money wisely. They have therefore asked the club to fund that part of the work which is soley for our benefit. The cost of the work is likly to be substantial for a non-profit making organisations such as MKSAC.

The Club is looking for donations, sponsorship and grants to provide the money. We are approaching companies both local and national as well as diving organisations. MKSAC can offer nothing in return except a small amount of publicity on our website, in our Newsletter and in the new Clubhouse. Please follow the link at the top right of this page (‘With thanks to…’) to find who has helped us. 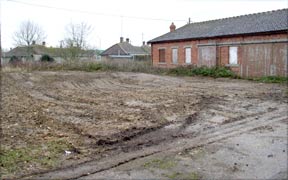 The first sign of work starting was the demolition of a water storage tank next to the Club House. The concrete tank (part of the original pumping station) was hidden beneath a mound of earth and brambles, visible in the left of the first picture. A few days work with a JCB was sufficient to dig out and break up the tank. When the rubble was removed, all that was left was a large muddy dip in the ground (pictured right). It is surprising how big the pumphouse looks now that you can see all of it! 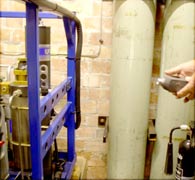 With the increase in usage of the proposed new centre it is important that there is no nuisance either to local residents or to other users of the site. As part of the preparation, the Diving Club measured the noise produced by the compressor. It was reassuring that we had to ask members to shut up since their talking was louder than the compressor!

Pictured left, a sound level meter (kindly loaned by Wilf, one of our members) being used to check how noisy the compressor is. 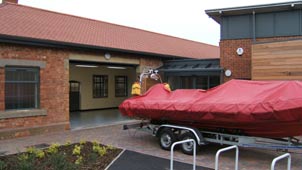 The boat is pushed into our refurbished clubhouse for the first time.